TURN TO THE STRONGHOLD!

Turn To The Stronghold Prisoner Of Hope!

"Return to your fortress, O prisoners of hope; Even now I announce that I will restore twice as much to you." - Zechariah 9:12 (The NIV Study Bible)

"Therefore, since we have been justified through faith, we have peace with God through our Lord Jesus Christ, through whom we have gained access by faith into this grace in which we now stand. And we rejoice in the hope of the glory of God. Not only so, but we also rejoice in our sufferings, because we know that suffering produces perseverance, perseverance, character; and character, hope. And Hope does not disappoint us, because God has poured out his love into our hearts by the Holy Spirit, whom he has given us." - Romans 5:1-5 (The NIV Study Bible)

Those two scripture's are definitely loaded with some wisdom! I will explain them further as we get into my sermon and testimony about my own life. But first I wish to point out that as it is with many books in the Bible. There are many scholars who believe that Zechariah and Romans could have been written by more than one author. Over time, often scribes would add more to the texts to expound their individual doctrine or beliefs.

When I speak; I like to open with a quote from one of my teachers, John Trudell. A Native American Activist, who I consider to be a modern day prophet. He often said something like this: "I'm crazy, so if I say something you just don't get, don't hold it against me. I'm not trying to start anything."

I was born and raised in Madison Wisconsin USA. My parents would abandon me when I was just a teenager. Growing up I suffered much physical and emotional abuse from both my family and from my peers.

Eventually I would dropped out of High School by mutual consent with the School leadership. There was a period of time during my teen years where I was homeless, thankfully there were some people in Madison who looked out for me. Unfortunately, there were others who took advantage of me too.

At Eighteen years of age. I passed the GED on the first try. Then enlisted in the United States Marine Corps. I did this because I knew that if I didn't do something different. I would end up in a lot of trouble and possibly do time in the prison system.

I truly enjoyed my time in service to this country. This was during one of our Nations Peace Time periods in between conflicts. After a few years in the Marines. I suffered quite a bit of physical and emotional abuse from others. It was a very frightening time for me because with them being equally trained as I was, I knew what they were capable of.

The Battalion had discharged me with a General Under Honorable Conditions Discharge. This was years before the "Don't Ask, Don't Tell policy." Because of it I was labeled mentally ill. Some Thirty years later, a heavy burden was lifted. you see, to tell a Marine, he can no longer serve as a Marine, is a difficult thing to navigate and it scars a person emotionally.

I received a full upgrade to an Honorable Discharge December Twenty-Six Twenty Sixteen! Because the department of the Navy decided that I had not been given proper due process, and I was a good Marine with no strikes on my record.

Unfortunately, during my time in Service, I became terribly sick due to a reaction to the Smallpox vaccination. At the time, I felt I had to stay  toe to toe with my fellow Marines and not let them down in any of  our training exercises. As a result of having to push myself harder than those that were healthy. I sustained several injuries to my body that still exist to this day.

The Band Alabama Shakes has a song that resonates with me...

For many years I suffered with emotional and physical health problems and did not know that I was dealing with Post Traumatic Stress Disorder from the trauma of the abuse I had received while serving. I had applied for Service Connected Disability after living on a very small Social Security Income. This was denied. I thought it was done and continued on making the best out of my circumstances and carried on.

Then one day a few months later I received a letter of awards, in that letter it stated that I would receive $28,000 dollars in back pay. It came and I used those funds to establish the necessary equipment upgrades for the TV Studio I was operating at the time.

In Zechariah chapter nine: it describes "turning to," this is also military term that means to make an "about face." In other words when marching toward a particular object that isn't helping. You make an about face and return to the stronghold or fortress. A retreat to the place of safety that protects you from life's Predators and storms.

During Zechariah’s time, cities and towns were built inside of a fortress structure to protect it’s citizens. So while a fortress is a place of safety and protection, it is also to do with a place of putting your faith in God and being hopeful.  That is the significance of returning to the fortress O you prisoners of hope.

In Romans it is explained what Zechariah meant by double to the prisoner of hope. They that endure their trials and tribulations, and embrace their God with have hope will receive double in blessings! I certainly did on that day I received a check for $28,000 dollars!

Quite a few years later, after putting time and effort into a long term relationship. My partner became abusive and shoved me around. I admit I became quite upset and threw a plate at a wall, thankfully it was where no one was standing. I left the house with just my walker and was on Williamson street  when several squad cars surrounded me. I remember there must have been around ten police officers and it was quite frightening.

I was arrested and put in jail; more accurately I was placed naked in a solitary cell. The County Jail Psychologist harassed me for three days. Accusing me of being a heroin addict because he could see I was shaking, which was due to me being so cold and not drugs. I told him he was in the wrong field and had no clue what he was talking about.

Finally on the third day I became very tired of this jail thing. I rolled over on my hands and knees and prayed to God. “God, you know my heart. I didn’t deserve this. I’m asking you right now to release me from this jail cell! Without seeing the judge! please just let me go!”

Twenty minutes went by and the bailiff’s deputy came to me and said “Come on it’s time to go before the judge,” another deputy pulled him aside and whispered to him. The bailiff’s deputy  became annoyed and slammed the door shut. Another twenty minutes went by and a deputy, opened the door and said. “You are free to leave.” No charges, no judge, no explanation, just released on my own.

Shortly after my release from jail i became very suicidal. People that knew me were concerned and convinced me to check into the Veteran's Hospital. I was released after a few days stay. However, I had to return to the hospital  shortly after because I recognized I needed help and I had made a promise if I got worse that I would.

Not long after my hospital stay, I would meet a man of God, The Reverend Marshall Norman. Reverend Norman learned about me and immediately cleared his schedule to spend time with me. He came, no judgement, no shame, just gave me his time, his love and his encouragement. Reverend Norman helped me to find my fortress.

I would serve in the Unity of Madison Church for several years in the Audio Video Technical Services. Many of those years as the Lead Tech. I was very instrumental in bringing that Church from an analog cassette tape ministry to live streaming, and oversaw our services being uploaded and archived on YouTube. This allowed those members of our congregation who were housebound, out of town or unable to be present at a service, a way of still being an active participant in the service and be a member of  the Church community. I believe it was through this method that the Church membership grew by Twenty-Five Percent.

I still struggled for a long time with who I was, what had happened to me and I was very hard on myself. One day I was in counsel with an Interim Minister, the Reverend Marty Newman. I was crying in her office and feeling lost and miserable, she stopped me and said “Honey don’t you realize that you truly are a man of God?” Me a man of God, I thought about it and the light bulb came on and I realized she was correct, I am a man of God and after that I really was a changed man in part because I recognized that I’ve got a river of life flowing down in me.

My life has taken me a great distance and I have really come a long way from that scared abandoned teenager. At one point in my life I was wheelchair dependent, this was hard, but I kept my faith in God. I experienced both daymares and nightmares which were distressing and exhausting. Thankfully, those rarely happen to me anymore. Through faith and with help, I have been able to turn my life around.

Here are some of the methods in my tool box:

In my closing remarks,  I hope that you can see and understand that I truly believe that God never forsakes or abandons any of us. It is the individual who leaves God. Those that do find their way back to the fortress, who do endure their trials and tribulations, those who continue to hope, who refuse to surrender to pain, will be rewarded eventually finding double in the blessings bestowed upon them.

There is so much more that I could talk about on this topic. But I wish to leave you with this, a song that I sing.

Thank you for allowing me to share this story with you. Each one of us has a story. We all navigate the high mountains and low valleys in our own ways.  If my message today speaks to you in any way. You can find me at ajwhitewolf.com My Ministry is focused on helping the homeless and at risk. I look forward with great anticipation the awesome things I will do with God. 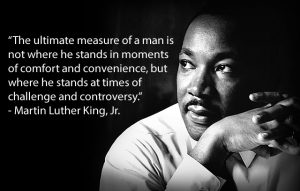 Edited and revised with the help of a Ghost writer October 27, 2019

Edited and revised with the help of a Ghost writer October 30, 2019