Benjamin Lay was born in 1682 in England to second generation Quaker parents. He came to be known as the 'Quaker Comet' and the greatest abolitionist you've never heard of.
Benjamin had no formal education so he educated himself, studying the history of Quakerism, which helped shape his radical and compassionate views. He became a great speaker, using gestures to define his talks.
Benjamin was a little over four feet tall and a hunchback; it is thought he probably suffered physically from complications of Dwarfism. An 1818 article described him thus:

... only four foot seven in height; his head was large in proportion to his body, the features of his face were remarkable

... He was hunch-backed, with a projecting chest, below which his body become much contracted. His legs were so slender, as to appear almost unequal to the purpose of supporting him. 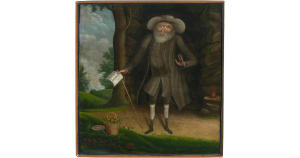 His first job as a teenager was as a farm hand and shepherd on his half-brother's farm. His father then apprenticed Benjamin to a glove maker, a job he did not like and he ran away to become a sailor when he was 21. He would spend the next few years sailing and living in London.
As a sailor, he shared cramped quarters with others from different countries and first learned about slavery through the stories from his sailor friends, some of whom may have been slaves themselves.
In England, Benjamin was regarded as disruptive and theatrical when he decided to speak out about whatever was on his mind. Benjamin’s determination to speak out was strengthened when he married Sarah Smith, a fellow preacher, who shared Benjamin’s strong social justice beliefs.
In 1718, the Lays moved to Barbados As a shopkeeper in Barbados Benjamin witnessed the cruelty to slaves first hand, this greatly disturbed Benjamin and at the same time ignited his passion for antislavery. The Lays, however, soon got into trouble with slave owners because they fed the hungry, opened their home to slaves on Sundays and were kind to all. Benjamin and Sarah moved back to England for a few years, but it didn’t last long and they then moved to Pennsylvania. They were shocked to see that slavery was very much part of the culture along with the cruelty, violence and hunger that slaves had to endure.
Benjamin Lay became known as the Quaker Comet, A man of God who spoke out against slavery and called for its’ abolition and who staged public protests to shock the Friends of Philadelphia into abolishing slavery. A generation after his death Quakers did adopt the abolitionist position and stopped owning slaves.
In 1737, Benjamin Franklin printed Benjamin Lay’s anti-slavery book:
All slave-keepers that keep the innocent in bondage, apostates pretending to lay claim to the pure & holy Christian religion; of what congregation so ever; but especially in their Ministers. Lay published his book without first getting the approval from the Quakers before publication, a major blunder and this along with criticism of fellow Quakers led to him being disowned by the local Quakers.
Following the death of Sarah, and being disowned and denounced, Benjamin went to live in a cave, made his own clothes, grew his own food, becoming a vegetarian due in part to his belief that animals too were “God’s creatures. An avid reader, Benjamin surrounded himself with around two hundred books in the cave.
Benjamin still attended worship services and continued to argue about the evils of slavery. He became more militant and more theatrical in his anti-slavery displays. In 1738, he attended a Quaker meeting dressed as a soldier. During the meeting, he stood up and gave a long sermon on the evils of slavery. He then stabbed a Bible with a hidden bladder filled with red juice, and splattered the “blood” over the heads and bodies of congregants who kept slaves. “Thus shall God shed the blood of those persons who enslave their fellow creatures,” he thundered.
Although shunned by the Society, Benjamin inspired others and in 1758 learned the Philadelphia Quakers had initiated a process to discipline and eventually disown Quakers who traded slaves. It would be another 18 years before they would abolish the owning of slaves.
Benjamin Lay, the Quaker Comet known for his faith, his impatience, his theatrics, his beliefs on abolishing slavery, vegetarianism, gender equality, and simplicity was a man ahead of his time. Benjamin was able to pave the way for other abolitionists such as John Woolman to continue his work. The slave trade was abolished in 1807, with slavery becoming illegal in the British Empire in 1833. Slavery was finally abolished in the United States in 1865.

The Lesson In This Saga

Benjamin Lay is an important historical figure. He was three hundred years ahead of his time in so many ways. An amazing human, and quite a dynamic charismatic character. He definitely upset the normal comfort zone of the Quaker Church. Many generations of Quakers would have a picture of Benjamin Lay on the walls of their homes. An unstoppable force. I encourage you to learn more about one of the most important people in history, who is not well known... The Quaker Comet, Mr. Benjamin Lay.

The following links in this section were used in research of  this document.

This document's original draft was written by AJ White-Wolf. A wonderful Ghost Writer who wishes to remain anonymous: helped to expound and make the document more coherent. The Ghost Writer has been a very big blessing in the process. - AJ White-Wolf