White-Wolf Ministries has in its possession a Thirteen food camper. It was originally a pop up that The Reverend AJ White-Wolf lived out of when he was homeless. It is a Coleman. The Slide outs were removed and the next step is to remove the canvas walls and replace them with permanent light weight materials.

"I can think of no better purpose for this camper that I lived in when I was homeless.
To use it to help feed homeless people and distribute things they need.
Will be rewarding in itself!" - Reverend AJ 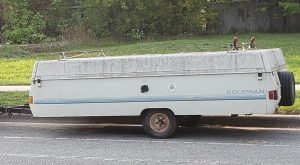 A Local Madison location for parking at night is needed. Preference is for a place that is safe and secure.

The unit needs three new tires. The two on the axle and the spare. They are probably over ten years old.

I would like a couple of RV refrigeration units. Even starting out with just one would be awesome.

a heavy door to secure the unit would be the perfect scenario.

Four to Eight Trailer Cameras would be ideal to mount around the unit for moving without doing damage to the trailer or other vehicles.

2 flat screen tv's would be used for menu's and available gear.

Two White Boards and Sandwich boards for messages would rock.

I have propane tanks and a Big Buddy Mr. Heater propane heater for when it gets colder.

The desire is to be able to hit a few of the Homeless Camps in the Parks throughout the day and feed people.

We would also carry items that people may need just to survive. Camping Gear, to Clothing, and Hygiene Items.

White-Wolf Ministries has a Generac 4400 Duel Fuel Generator. This could be utilized for both the Trailer and for the Homeless as a charging station for phones and devices.

Donations can be done here