This last year has been one of the roughest that I have encountered in my entire life. The pandemic hit and basically stalled everyone out. we. There were no opportunities for public speaking or performing in concerts. I had hoped to schedule regular Repair the World vigils too. It was a big frustration of mine.

A focus of mine has been on people struggling with at-risk situations or homelessness. I was using my camper and feeding people daily at the central park area off of Ingersoll. I was helping individuals with things like tents, sleeping bags, blankets, clothing. tarps for over their tents. It felt good to be doing something in the community.

Then One day after feeding these souls. I got home and was tired, I had absent-mindedly set one of the boxes on the stove. Then took foods I thought should be tossed down to the dumpsters. A fire started and engulfed my apartment a bit with a lot of smoke. I ran in and got my two dogs out. Hermes and Chewy, both were afraid, and Chewy somehow locked himself inside the crate that he liked to sit in. I got them out one at a time. But I had lost my apartment and most of my things that day. Some to the fire, but most to the water sprinkler system kicking in.

Chewy Bear started getting sick in the spring of twenty twenty-one. He transitioned on Mother's day. They had found a mass in his body that was causing him a lot of pain. He was not eating much at all. It was terrible to watch him slip so fast and cross over. He was a special little dog. He knew how to help me when I would have a PTSD flare-up. Chewy Bear was around fourteen years old. Maybe older. I am not sure. He was with me for approximately ten years.

After Chewy Bear left us, my beloved Hermes started to decline rapidly. He began having issues with standing and walking. It was very difficult to watch and for the last two months, I had to help him to stand up. On Monday I purchased a vest harness with a handle. I just couldn't keep picking this seventy-pound dog up off the ground. It was hurting my bad back. Hermes transitioned peacefully on September Twenty-Eighth in the late evening.

It has been very difficult to be in this very empty apartment. I miss those two so much. They were incredible gifts to me. They were both more than dogs. They were service dogs, emotional support animals, and best friends. They helped me get through the days when I just didn't feel so great.

My faith is strong, but my heart hurts. I am discovering PTSD anxiety and I am pretty sure that some depression has set in too. Losing these two dogs and the financial burdens of their health care, the debt from replacing things lost in the fire. All are variables that are making me have a truly difficult time. I do have an appointment with a therapist this coming Friday. My back and legs are in quite a bit of pain from picking that beautiful boy up every day.

In the book of Zechariah chapter nine and verse twelve. The text says "turn to the stronghold prisoner of hope. Today I will give you double" This text speaks volumes with just a few words. Turn to in this context is the same meaning as repentance. In that, you do an about-face and march in the opposite direction that you were heading toward. Prisoner of hope is what happens when an individual has endured a trial or tribulation. Endurance is the strength that we obtain from horrible situations. The stronghold is the fortress of God. A protective keep from the storms of life. The end result is double in blessings for every trial and tribulation.

Many have asked me if I plan on adding a new dog to my life. I have gone over my finances and it just isn't possible with the current debt. I do know what long term I will not be able to go without a service dog and emotional support animal. They ground me in ways I never understood before. Now that both of them are gone it is a bigger struggle for me to remain in my center.

I am holding on as a prisoner of hope. Waiting for the double blessings. Even though my heart hurts badly. 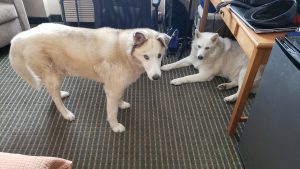