Being Of Service To Others

We quite often see a lot of sensationalism on the various news outlets. It seems to have shifted from a balance of uplifting stories and tragedies, to one of predominantly horrific situations and losses. The modern versions of the News seems to have discovered that National Enquirer type reports makes more money.

There are even some factions of pseudo news agencies that invent things and distort the truth to represent their individual ideologies. Through this method they are able to sway countless souls and convince them of things that are not entirely true.

Look In The Background

A young boy was terribly frustrated many decades ago when he would see very scary things in the News. His mother told him “no son, look in the background. That is where you will find the helpers.” That young boy grew up to be one of America’s most influential teachers via a television show on PBS. Mr. Rogers Neighborhood. His name was Frederick McFeely Rogers, and he was an Ordained Presbyterian Minister.

His show had a really long run. It started in 1968 and went on to become a powerful successful show until it ended in 2001. Through his various stories and Land of Make Believe sagas, he was able to capture the imaginations of young people around the World. He took various social justice issues head-on. Such as demonstrating that he and a black man were not any different from one another. He also demonstrated equality for women. He would even have people with various disabilities on his show to share their joys and struggles. A powerful teaching force was his television show.

Throughout the day, I do my best to stay unplugged from the News Media. I generally only tune into the evening News. Primarily because it is brief and doesn’t continue to prattle on about things. Sometimes I will even skip watching the news entirely for a few days at a time. It is my way of avoiding negativity. I never leave the news on as background noise. The reason for that is, it is difficult to see the helpers when it is just playing in the background while I am focused on other things. It is rare that there is something in the News cycle that is so important that I need to know the day it happened.

Be A Light To The World

There are so many examples of being a helper in the Bible that it is nearly impossible to know of each one. The Rabbinical and Christian commentaries take that even further. What I do know is that Men and Women of God are called to serve the World. It is one of the most important tenets of the Judaic Teachings and the earliest Christian Church Doctrines. The Jerusalem Christians Instructed Paul to go to the Gentiles but to always remember the poor. To which he embraced and gladly accepted the challenge.

The author of Luke claims that Jesus said to give of ourselves, that it will be given back to us. In the Book of Proverbs, we are given instruction to never withhold doing good for those who are in need of attention. In 2nd Corinthians, the sacred text points out that God loves a cheerful giver. When we serve other humans, regardless if they are believers or not. We would do well, to do so as if doing it for God. To serve others is a deep mystery, it is a sacrifice to God. The individual willing to be of service is the greatest in the Kingdom of Heaven. We all have specific talents and gifts to share and contribute to one another. This is the power of Faith. Knowing that we walk with God.

We should do more than serve just Church Members. For Peter was sent to a Gentile Cornelius, that man was a very good man. Yet Peter considered Cornelius’ house unclean, but God informed him that he must go and that was a new and basic doctrine of the early Church in the Book of Acts. We must be good Stewards and serve as many as we can. One of my motivations is as someone who has been through his own dark night of the soul and was healed in so many ways. Is that I have a deep sincere desire to always be a lighthouse to my fellow Man. To do my best not to be anyone’s storm. They have enough on their plate to deal with in their own daily lives. To add drama is not prudent for a Man or Woman of God.

So I encourage you to continue to be a light to the world. Rest when you become tired and let the Holy Spirit renew your strength. When you get exasperated at the news cycle. Just look in the background. Past the calamity being covered. Take note of the light bearers who work tirelessly to heal their communities through action. This my friends is how we repair the World. Each person doing his or her part, for one person at a time. Walking in Faith and Truth. With the Power of God in our lives. Amen. 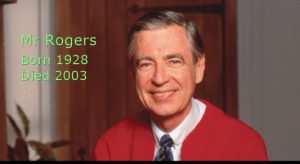 Fred Rogers: Look for the Helpers